The settlement of Phellos is situated on a ridge above Kaş and dates back to 700 B.C. Phellos’ importance during the Archaic and Classical periods is evident from the high quality and distinct architecture of tombs and grave monuments and the heroon. The small Hellenistic theatre leaning against the citadel’s east wall, rounding of the agora, is similar to the Hellenistic ensemble of theatre, agora and grave monuments in Xanthos. In Byzantine times the citadel was used as a fortified warehouse, probably to store the agricultural produce to be shipped from the growing facilities of the harbour in Antiphellos(Kaş).
Phellos today is an untouched ruin and as Prof. Martin Zimmermann who surveyed Phellos in 2003 remarks: “The Phellites designed the centre of their large polis, in away, asa museum to their own Lycian history.” 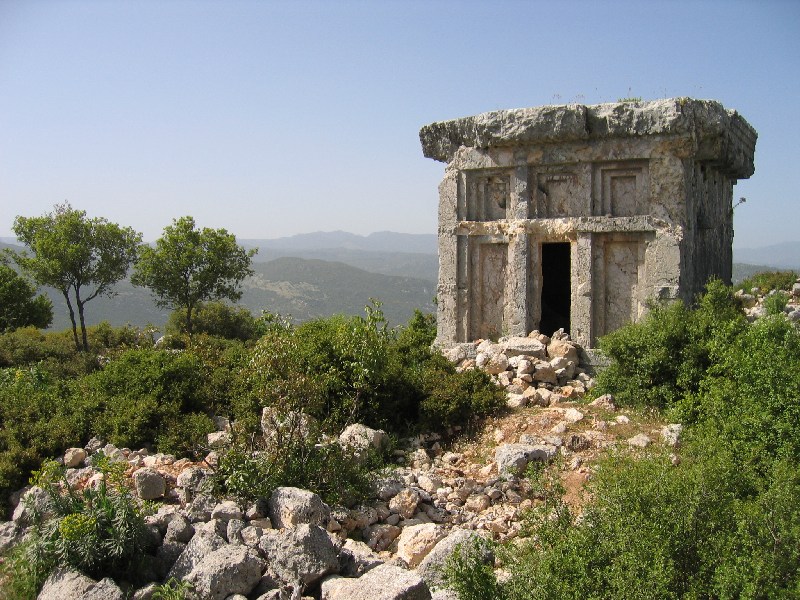 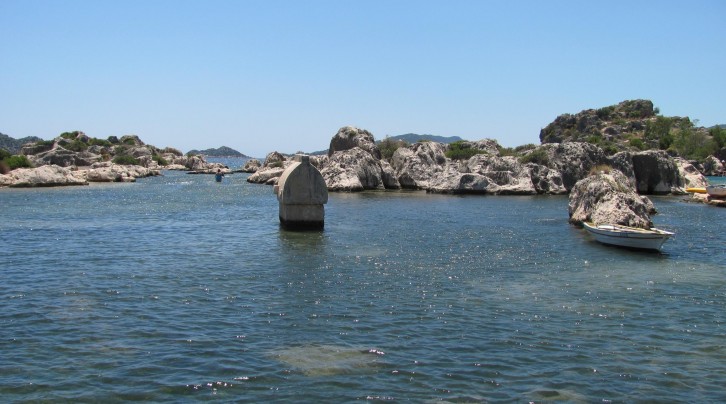 The picturesque little village of Üçağız (the antique Theimioussa)is the point of departure for boattrips or seakayaking tours. Both are great ways to see more of the Lycian pastand enjoy swimming in the turquoise sea. Elegant yachts on their Blue Voyage, sailing boats and rental ships for daily cruises anchor here and there are a few nice restaurants, pensions and gift shops. Here traditionally the women go fishing and master any boat available.
Kale Köy is a steep rock with charming little houses interspersed by rock graves and crowned by a castle (built by Mehmet II). East of the castle lies the necropolis and sarcophagi are on the water front and in the sea. With in the castle wall nests the smallest amphitheatre in Lycia hewn from solid rock, seating 80 people.
Across from Kale lie the remains of a sunken city. It sank supposedly by the two same earth quakes that shook Lycia in 141 and 240 A.D. A combination of plate tectonic shift and sea levels rising submerged the ancientcity. Today only goats climb up the stairs or drink from the cisterns.

Myra has been an important Lycian city since the 5th century B.C. The only remains of this era are the acropolis, the unique rock grave monuments, the river necropolis and the Roman theatre. Some of the most impressive stone carvings and relief paintings in Lyciacan be seen here. The rest of the antique city is buried under over 6 meters of sand and rubble. Myra was among the six most important cities of the Lycian League commanding three votes. During the Roman period its importance rose again after the heavy earthquake in 141 A.D. after which it was grandiosely rebuild with funds from Rome and rich local sponsors. Myra became a well organised politicalandreligiouspolityandwaspronouncedthecapitalofLycia (408-450A.D.). St. Nicholas Basilica, a world cultural heritage building, is located in Demre. St. Nicholas, a native of Patara, was Bishop here around 350 A.D., became famous for his good deeds, healings and wonders and was later canonised by the Catholic Church. Until today the basilica is a place of pilgrimage and believers flock to Demre on Dec. 6th each year to worship the Saint and marvel at the mosaics, tombs and frescos. 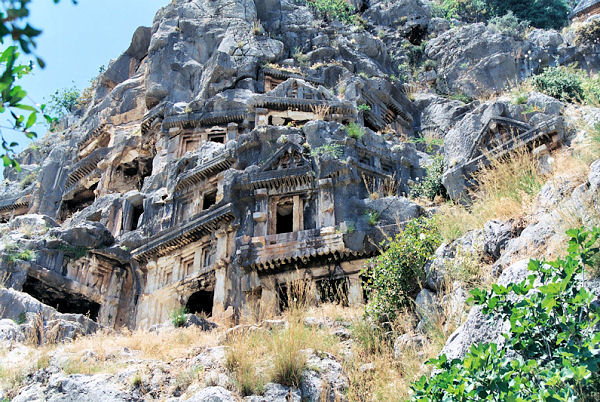 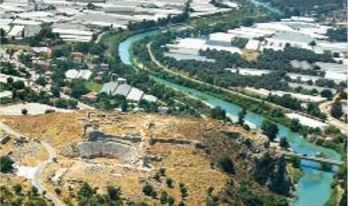 Yeşilköy, 30km from Kaş, is know as being one of the important agricultural districts in thearea. Places of interest include an ancient Roman aquaduct and Pınarkürü picnicarea.
Ova village, which is 43 km from Kaş, is also one of the importantagriculturaldistrictsinthearea.Here Çayağzı Beach is an interesting place to visit. The river Eşen Çayı, where they do river canoeing trips, passes by Ova village.
Kınık district, 45 km from Kaş, is also another important agricultural district. Xanthos antique Lycian site is near Kınık town. Canoeing in Eşen Çayı starts from here.

Kalkan is a picturesque little town west of Kaş with a little harbour and lots of nice hotels. The restoration of the old Greek houses in the centre part is well advanced and beautifully done. It has developed very fast into afavourite location for summer houses which has changed its old character. Kalkan is full of restaurants, shops, bars and small hotels, a very lively place during the summer. Strolling up and down the steep alley ways the eye can feast on the old architecture and the abundance of flowers around. 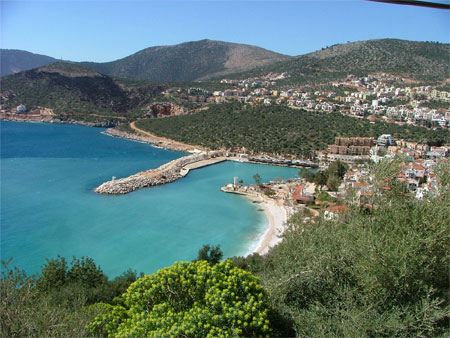 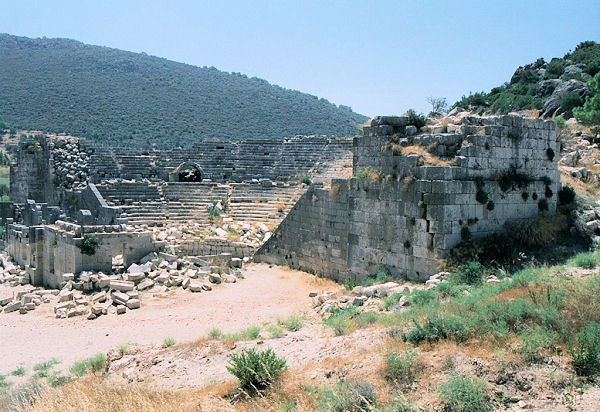 The name Patara stands for a marvellous 12 km white sandy beach which is classed as one of the most beautiful beaches in the world and for the ancient ruins of the ancient town still partly buried under the sand. The beach is also a nesting place for turtles and is therefore environmentally protected. The ancientcity of Patara, the birthplace of St.Nicholas and the port where St.Paul changed ships on his way to Tyros is in recent years being carefully excavated by Prof. FahriIşık.

Patara used to be the most important harbour of Lycia and one of the major members of the Lycian League with three votes. During its eventful history the city always had to struggle against foreign invaders and a giant sand dune. The cityharboured an Apollo oracle as important as Delphi and Delos and Alexander the Great as wellas the Roman Emperor Hadrian and his wife (just to name the most famous) had vested interests here. Today the nearby little village of Gelemiş provides simple accommodation during the season.

Xanthos, for a time, was the capital of Lycia and across the river lies the sanctuary of the Lycian League, Letoon. Xanthos’long history was a succession of political and cultural prosperity and major catastrophes. From Herodotus we know that the inhabitants burned their property and killed their families in order to resist the siege of the Persian General Harpagus(545B.C.) and then left the city in order to fight the enemy and were killed to a man. The city was rebuilt and had close political and cultural relations with Athens. After Alexander the Great conquered Xanthos (334/333 B.C.) the city was governed by changing rulers until as the capital of the League it developed close relationships with Rome. When Brutus arrived to levy troops and requisite funds to overthrow Octavian and Antonius(42 B.C.) the army of the League lost the batt leand the tragedy was repeated. Xanthos was rebuilt by Marcus Antonius and Vespasian but lost its place as first city to Patara. The most famous monuments, the Nereid Monument, the Harpy Tomb, the Payava-Sarcophagus and others are exhibited in the British Museumin London. Xanthos is on the list of UNESCO World Cultural Heritage. 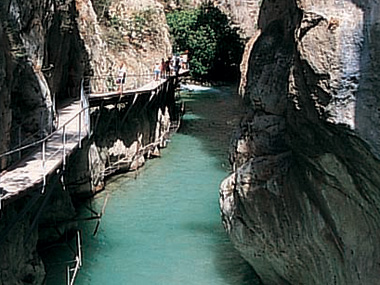 Saklıkent, which means the hidden city, is an impressive, steep gorge cut into the Toros at the end of which there is supposed to be a forgotten city. Entering one has to wade through ice old water which becomes a fast flowing river during the rainy season. The mud in the canon is supposed to be healthy for skin and body. There are a few restaurants built over little ponds, inviting one to relax and dine.

North of Kalkan high up in the Toros Mountains some villages are tucked away under pine trees and grapes. In the autumn hundreds of trucks transport grapes to wine producing companies and the famous and healthy grape syrup (pekmez) is cooked by the villagers. In İslamlar the miller still uses the watermill, the pipes of which were constructed in antiquity. The cold and clear mountain water is also collected in reservoirs to cultivate trout, adelicious dish to be had up here. The view from the simple restaurants down to the sea is breathtaking. It is worth driving further up to see the beautiful highplains, mountains and more ancient Lycian sites. 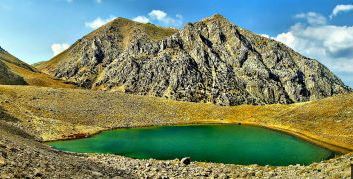 The drive to Gömbe takes you up into the Toros Mountains, away from the Med and to a different climatic zone with hot summers but cool nights and cold winters. The narrow roads lead through little villages, mountain pastures, and over high plateaus with breath taking views over lush green forests and the famous cedar woods. A new dam has been built recently to supply Kaş and others settlements with water. Migration patterns still work and thus herds of livestock and flocks of goats are taken up to the Gömbe area in the summer months. The area around Gömbe and further up to Elmalı is full of apple orchards and fruits which need frosttogrow. Walkingincleanairandwithonlythesoundof nature is one of the delights up here. The Green Lake, named for its green water, is worth a foot march and for a moment one feels at its shores that one might be on the moon.

Across from Kaş lies the small historic and pretty Greek island Castellorizo (Meis). Kaş cultivates close relations with the Greek neighbours. Daily boattrips are offered from both sides and the island became an official port of entry in summer 2007 with daily flights and ferry boat service to Rhodes. The only Lycian rock grave in Europe can be found in Meis. Most of the old houses have been restored by now and there is the castle, some churches, and a museum to visit. 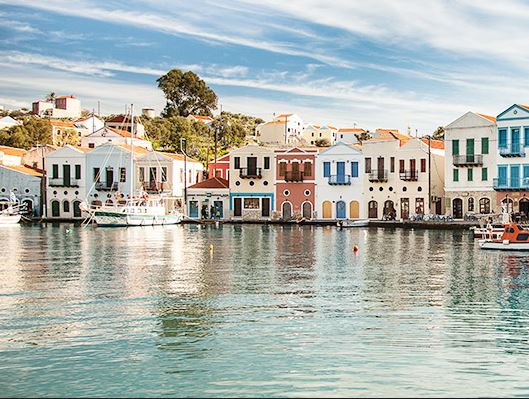 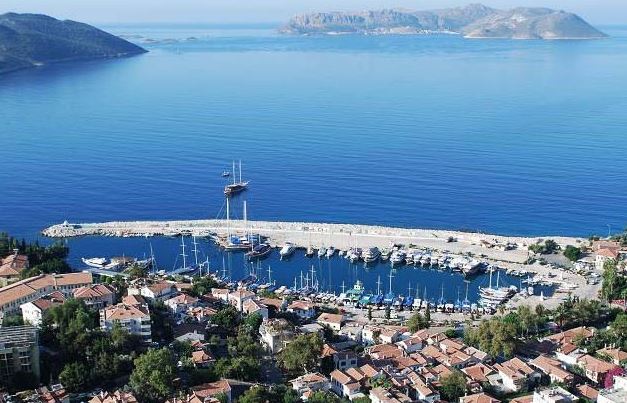 Kaş Marina, run by Setur and Mak Marin, started servicesinBucakSeaforvisitingandmooringyachtowners in Kaş providing both marina facilities and hotel accommodation. The marina has capacity for 472 yachts in the water and 160 on land. There is enough water depth and facilities for every size of yacht including super and mega. There is every type of service available at the marina. 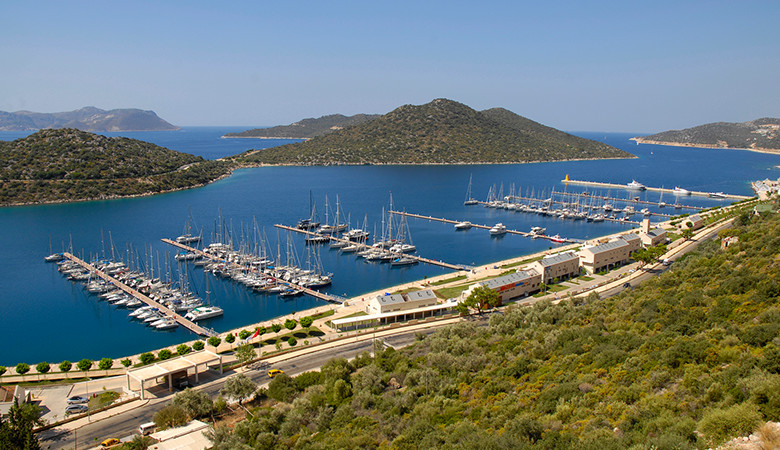